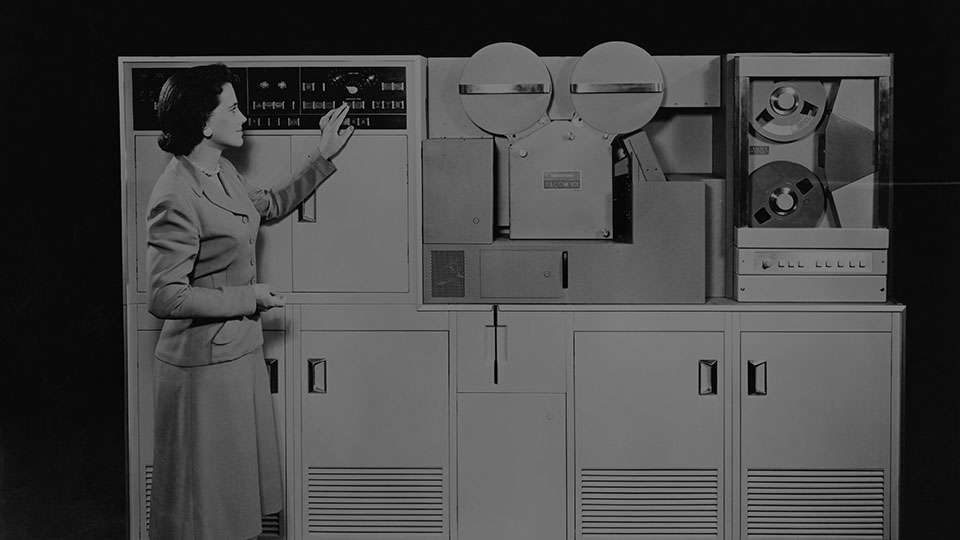 A Brief History of Digitization

While it may seem like a recent development, the trend of converting analog or physical processes and documents has been going on for decades. Digitization essentially began with the advent of computers in the 1950s. Since then, the non-stop march of digitization has transformed nearly everything into computer-friendly 1s and 0s and has changed the way we work, communicate, shop, bank, and even how we relax and entertain ourselves.

Here are some of the important milestones in the history of digitization.

1956 - IBM introduced the business world to magnetic disks and random access data with the 305 RAMAC and the 650 RAMAC (Random Access Memory Accounting), first used in United Airlines’ reservation system. Each incorporated the 350 Disk Storage Unit, which weighed 1 ton and offered a total capacity of 5 megabytes - that’s roughly the equivalent of a Mitsubishi Mirage and a single 4x3 inch HD image file.

IBM’s press release announcing the RAMAC claimed that, “business transactions will be completely processed right after they occur.”1This captures the value of digitization, which was, and still is, faster, more efficient processing.

1960 - Not to be outdone by their competitor, American Airlines launched their Sabre flight-reservation system in 1960, which processed 84,000 telephone calls per day and stored 807 megabytes of reservations, flight schedules, and seat inventory.2

1968 - U.S. libraries began using Machine Readable Cataloging (MARC) records. The initial MARC Pilot Project was conducted by the Library of Congress and involved transitioning cataloging data for about 16,000 titles into machine-readable magnetic tapes for easier distribution. By the end of June of 1968, around 50,000 records had been distributed to be used in the production of book catalogs, catalog cards, and other library tools.3

1968 - While “cashpoint” machines (early precursors to ATMs) had been introduced in London nearly a decade earlier, the development of digital technology allowed Swedish savings banks to begin testing a networked cashpoint in 1968. The connection with the bank’s computers and digitized files delivered a more complete user experience, as they could now also check their account balances and withdraw different amounts without interacting with a human teller.4

1971 - Long before the popularization of eReaders and eBooks, Project Gutenberg was launched with the goal of making copyright-free works electronically available to everyone. The project’s founder entered the text of the U.S. Declaration of Independence into a computer mainframe at the University of Illinois, kicking off a trend of document digitization that continues (with a few key advancements) to this day.5

1984 - For the first time, the US Census Bureau asked respondents about their computer use in the home. At the time, 8% of all U.S. households owned a personal computer. By 2016, 89% of US households reported computer ownership (including smartphones), and 81% had a broadband Internet connection.7

1991 - The first 2G cellular network was launched in Finland.8 By using digital signals rather than analog transmissions between mobile phones and cell towers, 2G networks increased system capacity and introduced revolutionary (at the time) data services like text messaging, which would go on to become one of the most dominant forms of communication in the decades to come.

1994 - In possibly the first ecommerce transaction ever, a large pepperoni, mushroom, and extra cheese pizza was ordered online from Pizza Hut.9

2003 - For the first time, electronic payments surpassed cash and checks as US consumers’ preferred method of payment.10 This was fueled by the growing popularity of debit cards as a payment option.

2004 - Exela Technologies releases the first version of its DocuScan enterprise scanners, used to digitize documents and paper checks. DocuScan evolved into the IntelliScan line of scanners that include integrated optical character recognition technology and intelligent data extraction software. The IntelliScan is currently one of the fastest scanning platforms in the world.

2012 - Nearly 20 years after that large pizza was sold via the Internet, annual ecommerce sales topped $1 trillion worldwide for the first time.11

2020 - Mastercard and Exela partnered to launch a Request-to-Pay solution, which became the first of its kind enrolled with Pay.UK. This technology enables greater communication and flexibility for both billers and payers through a secure, unified messaging service.13

Digital Transformation has been one of the most persistent and notable large-scale trends shaping the modern era - and it shows no signs of slowing. Recent advances in OCR, ICR, and machine learning technology have made transforming paper documents into fully digital assets faster and easier than ever with an ever-increasing degree of accuracy. The development of real-time payment options is set to revolutionize peer-to-peer transactions. And myriad other advances are being made that will continue to expand our digital capabilities.

#DigitalTransformation #Technology
Optimizing the Office with an Intelligent Workplace
Sep 28, 2022
Read the Blog

#IntelligentLockers
Why Every Retailer Should Embrace BOPIS
Sep 15, 2022
Read the Blog
END_OF_DOCUMENT_TOKEN_TO_BE_REPLACED